Beyond Buyer Profiling To Buyer Personification

Segmentation has been a staple of business marketing and sales for several decades.  The concept of breaking down a potential market or industry into smaller target segments is a standard technique taught in business schools and used by many organizations.  Beginning in the 1980’s and 1990’s, we began to see a shift to individualism.  The understanding of not only the segments and organizations that buys but also the individual that buys.

We saw the influence of the Meyers-Briggs Testing philosophy extended into the business world.  Whereby sales organizations, in particular, went through training on how to adapt to the personalities of individuals in the buying process.  Coinciding with this period was the introduction of strategic selling to the individuals within a team of buyers.  Miller Heiman introduced the concept in the mid- 1980’s.  It is where we first saw the distinctions given to the economic buyer, the technical buyer, and the user buyer.

These combined perspective resulted in an emphasis on profiling the individual buyer.  Predominantly, the majority of these efforts to understand the individual buyer were taking place to improve sales effectiveness.  With an emphasis on strategic selling and understanding the key strategic initiatives, risks factors, buying teams, buying processes, and buying criteria involved in selling.  (Many may remember profiling performed with Miller Heiman blue sheets.)

At the same time, we also saw the prominence of product management and product marketing rise in 1980’s and 1990’s.  The jobs of product marketers were to market to customers the product lines of the organization.  Along with sales, they began to cut and dice segmentation efforts and perform profiling of buyers.

Then the Internet came along and changed everything.  Or, did it?

When the Internet came along, we began to see a seismic shift in how buyers gathered information and made decisions.  As time progressed in the early decade of 2000 to 2010, reliance on the sales representative for product and solutions information began to diminish.  And, began the era of marketing fulfilling the role of going beyond just brand advertising, but also building awareness and enabling buyers to research solutions.

Marketing now had a responsibility to know more about buyers and customers in a way that was beyond just advertising.  Marketing since has turned to buyer profiling to do so.  The irony is marketing has, in effect, been repeating the same cycle as sales did in the 1990’s.  That is, profiling buyers, particularly B2B buyers, in much likeness to when strategic selling burst onto the business scene.  Attempting to categorize every profiling data field possible related to the individual buyer or buyers.  Including many of the same attributes or factors sales was categorizing in the 1990’s related to buying criteria and “targeting” buyers.

What is empowering profiling is the growing presence of data, automation, and analytics.  However, there is the inherent danger of automating the bad and putting profiling on steroids.

Buyer Profiling Is Limited In Ability To Support Personalization

The advent of big data and analytics is driven by the need to gain insights into buyers and to drive the concept of personalization.  Personalization is an extension of database marketing, whereby attempts are made to differentiate through personalized marketing.  While this movement is propelled by automation and analytics, it is severely compromised by the limitations of buyer profiling.

What this points to is marketing’s use of facts-based (even out-dated) buyer profiling is limiting its ability to meet the merits of personalization.  Some buyer profiling in marketing, based on reviews I have conducted, are more elementary than pre-Internet.  In essence, struggling to evolve much beyond the buyer profiling advances originating in the 1980’s and 1990’s.

Masking this lack of evolution is the mistaken notion of new advances in data analytics and automation means a quantum leap.  Multiple surveys, such as mentioned above, indicate this has not been the case.

An important factor to mention is the concept of personalization has its own limitations.  For it implies targeting to a large segment and drilling down to specific groups and audiences.  This top-down approach is unable to breach the layers past groups or audiences to be truly “personalized” with buyers on an individual level.

From Buyer Profiling to Buyer Personification

The sterile nature of buyer profiling being performed by marketing today is based on identifying many facts-based or logic-based attributes and characteristics.  For example, targeting groups of buyers within segments and characteristics related to, in B2B, company size, roles, job responsibilities, titles, strategic initiatives, pain points, buying criteria, and etc.  Not a far cry from the profiling introduced by the likes of Miller Heiman in the 19980’s and 1990’s.

Rather than being limited in thinking to profiling and personalization, marketers today need to grasp the true concept of personification.  Personification is a focus on human-centered attributes and characteristics.  When Alan Cooper originated the concept of (goal-directed) personas for user-centered design in the 1990’s, it coincided with the publishing of The Digital Economy by Don Tapscott.  Which foretold of the evolving digital economy we are experiencing today.  User-centered design is based on the personification of interactions with digital products and software.  In other words, the intent is on humanizing digital interaction design.

Buyer personas are an extension of this concept regarding how to understand buyers in this humanizing context.  When I first created the process, as well as, use of buyer personas in 2001-2002 after my stint with Cooper, I saw a potential far beyond buyer profiling. As a previous VP in both sales and marketing, I was well schooled in the use of profiling and database marketing and knew of its limitations.  What I saw was a potential for buyer personification as a concept important to the rapidly advancing digital economy.

Buyer personas are not a tool for the profiling of buyers, but rather, they are part of a holistic process for the personification of buyers.

It is time for businesses to move beyond buyer profiling.   Instead, to attain the prominent place of an organization with a brand known for helping buyers to achieve their goals, they must embrace the concept of buyer personification. 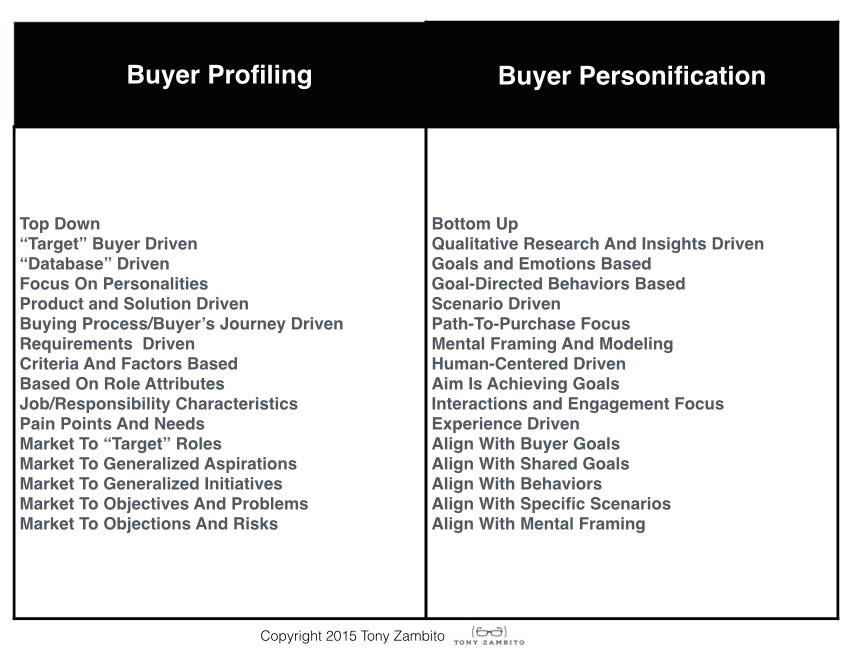